Is “worry” the natural response to inaction? 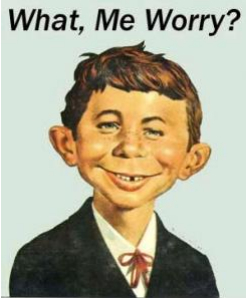 Guys don’t worry about anything.  We don’t.  We might over analyze, or extensively plan for various contingencies And we might even assume the worst when we are contemplating our next series of moves.  But…we don’t “worry.”  We might drive ourselves to the point of near insanity trying to control what happens in the future, but we absolutely don’t worry.

So, we watched a video by Andy Stanley that I have respectfully re-titled “How not to over analyze, plan, assume the worst and seek to have total control over all situations in the future.”  You can watch it here:

One guy said he thinks that often a person’s worry is simply the emotional result of their own inaction, knowing you can/could do something, but haven’t (yet).  A number of guys agreed that they do tend to have sleepless nights over things they should have done, or wished they had done.  Other guys didn’t agree with this concept and thought worry was more likely to be about those things you can’ control.

Then, we took a look to see if what we worried about matched up with our own list of things we hoped we were devoted to.  Many of us had a mismatch.  We want to be devoted to God and family, but we worry about work.  Uh oh.  Guess where are devotion is, by Andy Stanley’s definition.  (There was a general agreement that worrying about work is an indirect concern about providing for your family, which is one place that should have our devotion). What kinds of things would we worry about if our lives were devoted to Christ?…. Not much.  Would we be busy?  Yes.  Would we have have to work hard?  Yes.  Would we have to worry?  No.

When we first visited this topic a few years ago, many mentioned that they wished they had been part of this conversation when the economy went south.  Having been downsized, and lost their houses, cars, boats and wives, they can attest that worrying about it was a waste of time.  It didn’t change anything and just made going through it more miserable.  Will they remember the futility of worrying next time?

Here is a sampling of what some of the guys said as we went ’round the room to share our take home idea for the week. (The title of this blog post was from one of the guys during this segment.  wow!)

This is really a matter of trust for me.  Trust in God.  There are people in my life I trust to do all sorts of things, and I don’t worry at all.  For some reason, the things I need to count on God for the most – like the future – is also where I worry the most.  I need to work on trusting God

I am going to spend some time trying to make sure my belief in God and worldly pursuits are in congruence.

What he (God) wants for me is to be more free, not to worry.

By worrying…can you add even one hour to your life?

I am going to not be so involved in thinking about future activities,  I don’t take time at all to seek God’s guidance and I should.  Life would have a better balance.

I don’t worry about much, just my kids.  That is what I am devoted to.

It is pretty self evident that tonight’s video and conversation was significantly God focused and biblically based.  In a sort of strange irony, I worry a lot about alienating some of the non-christian guys in our group when we have nights like tonight…. It didn’t seem like it was a problem, though.  I think maybe one guy made a pretty big leap of faith during our discussion.  Maybe I should just look at the birds of the air….

Everything You Know About Charity Is Wrong »
« Quit telling your woman she looks good. She doesn’t believe you anyway!