You are an Idiot! Why else wouldn’t you agree with me?

This week we watched a 9-minute video of Kathryn Shulz, the world’s foremost expert on being wrong.  She found that once we discover we are wrong about something, there is a meaningful amount of time before that, where we were wrong, and just didn’t know it.  In this space of time – we were wrong, but didn’t know it yet – where being wrong felt identical to feeling right.

Her point is that the human psyche does not have a reliable internal indicator for alerting us the moment we become wrong about something.  To demonstrate it, she says, people have an abstract understanding that people make mistakes, etc.  However, in the present tense  – the here and now – no one feels like they are wrong about anything.  They have been wrong before, and will be again. 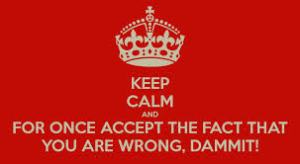 We discussed and debated this concept at length and came up with a number of conclusions, most of which centered around two major themes.

Start by recognizing the difference between an opinion and a belief.  An opinion about something is easy to change.  However, if you have “beliefs,” it is harder to accept being wrong.  Make sure you don’t have beliefs about things which should only have opinion status.

Many of us had experiences where we had to own up to being wrong about something, and the person on the other side handled it very well.  To this day, we have a lasting positive opinion of that person.  If someone admits being wrong, apologizes and assures that it won’t happen again, then accept the apology, and then act as if the situation never happened.  Don’t expect more from them than a fair restitution, or continue to hold it over their head.

We are Holy Smokes… »
« The Key Ingredient to Success