“A Battle to Fight” 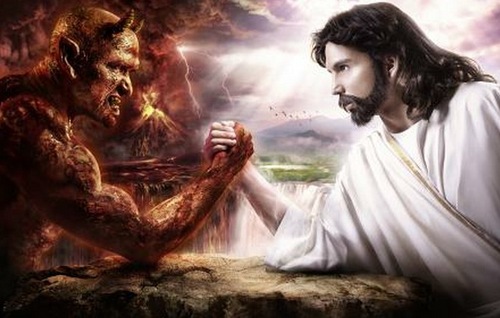 This week was so powerful that reducing it to words on a blog has proven difficult.  I’ve started to write this every day this week, and not known where to start.  We watched our third video from the Wild at Heart series (I think watching them only occasionally, and out of order, really works for our group) titled “A Battle to Fight.”

John Eldredge suggests that if you ask any man about his favorite movie and it will include a battle…a hero fighting against all odds and conquering.  He’s right.  We love a good fight.  It’s why we like to watch the competition of sports, or even compete ourselves.  When it’s down to the wire – everything on the line – we want to be in the game.  We are hardwired to fight for something.

But..what battle are we fighting?  And, will we have the courage to fight when the time comes? The challenge is to make sure we are using our strength for something, or someone, or a cause that is bigger than us.  This video took head-on the issue of evil – Satan himself — and how he works in our day to day lives.

It’s fair to say that many guys in the room have never even considered satan.  Just not on their radar…at all.  Others have thought about it, but think of him as a cartoon character with horns and a pitchfork.  Very few have an awareness of the influence of evil in our lives and of those that we love.  The conversations, and testimonies, on this topic are mind blowing once guys really think through the presence of the devil in the world.  For example,

“I wondered who was whispering in my wife’s ear.”

“I never really believed in the devil.  It was just academic.  Framed this way….it makes road blocks in life more understandable.  Makes it more real.”

“There is a higher power controlling.  Negative things aren’t just happening on their own.  They are being controlled.”

In the video Eldredge says the devil works in three stages against us.  The first stage is where he works to convince us that he doesn’t exist.  All our problems are just a result of our own failings.  He controls our thoughts and would have us assign blame to negative situations to circumstance, the weakness of others, but mostly has us blame ourselves.  When we are in this stage, it never occurs to us that he is out there controlling.  Eldredge says most people – including most Christians –  live in this stage their entire life.

We need to recognize that there is an evil controlling power – and it is our job to fight it. Then we enter stage two, where satan starts to make things difficult.  He trips us up and causes all sorts of trouble for us – and we know it is him.  He causes others to do hurtful things to us, strains relationships, fills our minds with self doubt, makes us feel unsettled, creates emotional -and sometimes physical- chaos, makes bad things happen…All to intimidate us.  To get us to back down.

The third stage is when he tries to cut a deal.  ”Hey…I’ll back off if you do.  Put your gun down, and I’ll put mine down.  Let’s call a truce.”  Which, of course isn’t a truce at all.  When we stop fighting evil, evil wins.  The problem is that we are nearly positive that we don’t have the strength/wisdom/courage to fight and win this battle.  Thankfully, Jesus does, and works through us.  As one of the guys said “Our job is to show up.”  Sounds easy, but it takes real courage sometimes just to show up.

One of the guys shared an amazing story of his own life and journey.  He admitted to once being a fierce warrior, and without realizing it at the time he made a deal to give up the fight.  Tonight, after watching the video and being part of this discussion, he was “picking up his gun” and joining the battle again.  Here are some other thoughts from guys in the group about being courageous and joining the fight:

“I’m going to use my words this week as positive weapons.  I will make a relationship with someone that might be uncomfortable.  Ask someone to come to church, or HolySmokes.”

“I’ve always been a courageous fighter.  But I now know it’s not just the battles I can see.  It’s a whole lot bigger and I’m not in the fight alone.”

“I’m going to pray for wisdom.  Am I supposed to be aggressive today, or passive?  Help me understand what the right role is for me each time.  I’m going to rely on God to guard my life, and show up for the battle.”

“I want to lead my wife and family.  I do it with others, but I’m picking up my sword and leading my home.”

“Thousands of satan’s angels are cheering when we sideline ourselves.  Do I trust God enough to fight?  When I hold back, it really is about not trusting God.”

“I want to recognize when I am backing down.”

“How many times have I missed the chance to fight?  I kills me to think of the times I should have been courageous – with my daughters and family,  He is not happy with me when I am on the sidelines.”

“I never thought about this kind of thing. Men aren’t supposed to only be like Mother Theresa. We better be ready to battle.”

If anyone wants to watch a sample of the video we watched tonight, here is the link. http://ransomedheartvideo.podbean.com/2009/03/23/a-band-of-brothers-a-battle-to-fight-part-2/

One thought on ““A Battle to Fight””