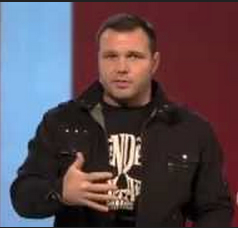 We began the year in much the same way that we ended it, watching Mark Driscoll talk about manhood.  In this video he describes the journey from boy-to-man, and this modern American invention called adolescence.  There are specific steps that one traditionally needs to complete in short succession to become a man, and sadly many guys get stuck after completing step one or two.  The steps are:

Too many men put off responsibility as if it was a bad thing. They define manhood by “how much meat you can put through your colon, and how many beers you can pound, how fast you can drive, how far you can spit…As if there was any woman on earth who spent her night praying ‘Lord..please send me that guy!'”

They get stuck in adolescence.  Mark says these are not men, they are boys that need to shave.  And the women who put up with this kind of guy bear some of the blame.  In some cases they enable this behavior by becoming more a mother, than a wife.

Mark suggests that many of today’s men define themselves by what they consume. “You want to be a man?  Buy this truck, drink this beer, wear these clothes, use this deodorant, etc.”  Wrong.

Men are defined by what they produce, not what they consume.

Candidly, many guys in our group found themselves on the wrong side of this equation – admitting they consume more than they produce.  God created men in his image to be creators and cultivators, producers not consumers.

In our discussion, guys talked about how they wanted to raise their sons to be the men Mark describes.  There was one guy who declared that he wanted his sons to spend a lot of time in adolescence after college, goofing off and not having responsibility.  Spending their days backpacking around Europe, being ski bums, etc.  We didn’t really resolve this difference of opinion, and I don’t know if he was the only one who felt that way.  He may have just been the only one who spoke up about it.

Other guys, who only have daughters, really wrestled with the concept of raising their girls to be dependent on real men to provide for them and care for them.  Before tonight, and after the discussion, too, they had been raising their daughters to be self sufficient and dependent on no man.

This was a good night of discussion to be sure.  Plus, Mark is a fantastic speaker.  You will find yourself laughing a lot.  Here is the video:

Accountability vs Judgement »
« You’re in charge of shutting up. That’s your job.